Last night I dreamed a book within a book. I am sharing this here because I just woke up and I don’t want to forget it. I may use it someday. Not anytime soon, though. It would be a big project.

The inner book in my dream was called “The Poor Wood” and was sort of a cross between Winnie the Pooh, Robin Hood, and The Lord of the Rings: a group of stuffed animals and kids fights a wealthy supernatural menace to their homes in a magical but run-down forest (the “poor wood” of the title).

The outer book, also called “The Poor Wood,” is the story of a very small farmhouse in the southeastern United States, built in 1904 or so, just a little bit after Reconstruction, to house the family of a tenant farmer (also known as “sharecropper”). After the Civil War, plantation owners, who could no longer use slave labor to work their vast holdings, broke their fields up into small “tenant farms,” where poor farmers — blacks and poor whites, like my grandfather — who didn’t own the land were allowed to farm on it, “paying rent” in the form of the lion’s share of their actual crops. It was a very medieval situation, ripe for allegorizing in a fantasy story. 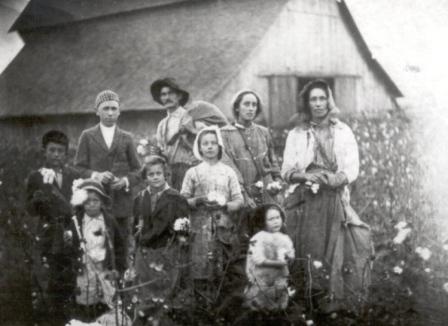 A tenant farm family from Tennessee, 1910

One day coming back from a trip to the city, the tenant farmer brings home the book “The Poor Wood” for his youngest daughter (of seven children), who reads it and loves it.

The idea is that the book stays with the house through generations of change, and the story within the book comments on the story outside it obliquely. Chapters alternate between the inner and outer book.

If this were a European story, all of those generations would be in the same family. It is not, and they will not be. The story of the lower middle class and working poor in post-Reconstruction South, at least in my family’s experience, has been jolting and jarring dislocation from one generation to the next. My own family only carries its memory of its roots back to my grandfather, who apparently ran away from home (a tenant farm) because he didn’t like his father’s second wife, or maybe to enlist in World War II, or both (he wasn’t very clear). Though I’m sure he and my grandmother remembered the generations previous to themselves, they never talked about them, and we never asked. It didn’t seem important. By the time I was born, my grandfather was not a poor man — he made a very decent living traveling the world as a pipeline welder, after signing on to a pipeline job that happened to run through his farm one day in the early fifties — so maybe the prior generations were just an embarrassment to him, and this sudden brick wall in our history is something specific to my own family. That’s possible.

Back to the outer book in the dream: In the late 1920s the daughter of the tenant farmer elopes with a young swell from the nearby town, and leaves the book behind her (she thinks to pack it, but her rucksack is too small and she wants to make sure she carries some other particular sentimental item, let’s say). The tenant farmer himself is obliged to move out of the house a few years later when a highway comes through, cutting off this small corner of the larger landlord’s farm from the rest of it. The next family to move in is a Baptist preacher’s family, with three boys, who discover the book and recreate its adventures on the property — mapping specific events in the story to specific locations around the house. These location matches continue to persist in the imaginations of the next children who live in the house and read the book.

In my dream, all of the above had already occurred, and I was a kid who had been raised in the house in the 1970s and 1980s, when it had become part of a tract of small houses in the town (the same town the young swell from chapter one came from, only now the town has grown to envelope the former tenant farm). The old farmhouse is the one old house, the one wooden house, in a row of pre-fab brick Jim Walter crackerboxes.

I attended a “reunion” of all the kids who had grown up there, and who remembered the book. We were all excited to share our impressions of the book with one another and compare notes on how we had mapped the story to the real world — both in terms of locations around the (ever-shrinking) yard, and in terms of the events of the real world matching the events of the book — “we thought that when the Owl and the Leopard invaded the Poor Wood it was similar to Hitler’s advance on Poland” — “We compared it to when the Wal-Mart moved into town and all the stores downtown closed,” that sort of thing. I doubt this scene would work in any book I actually write based on this dream, because it would require somebody to organize these generations of people — who have no connection to one another except for this book and this house — into a reunion. I suppose in a slipstream mode you could imagine that happening, but I had thought of this as a fairly realistic story — at least in the outer book. Maybe the organizer could be the narrator, and his quest to find the people who had lived there could be the organizing principle of the book. Maybe.

The last chapter of the inner book involves a curse on the kids and stuffed animals, that will make them forget who they are and forget their history. This applies to the theme of dislocation after the Reconstruction, and also allows the reader to half imagine that the kids from the outer book are also actually the kids from the inner book.