Joe Botts and I met twenty years ago today (more or less — we know it was in August, and have decided to celebrate in the middle of the month), in Birmingham, Alabama’s Rushton Park, which was a gay hangout back then. Maybe it still is. I dunno. Most of the results for “gay Rushton Park” on Google point back to this very blog. Maybe I am the last one who remembers those days.

I was wearing Daisy Dukes.

He was on a date with another guy.

I quit my job as a waiter’s assistant at Highlands Bar & Grill the next morning so I could continue to hang out with Joe. I hated that job anyway.

“You’ve put me in a very difficult position,” said the lady.

“Sounds like a personal problem,” I said to her, because that was one of her favorite phrases to use with her staff.

I moved in with Joe that next morning. We’ve been together ever since.

Some random memories of our early days:

I sat on our dining room table, looking out the window, and said, “Let’s never, ever fight.”

Love is not about refusing to fight one another. Love is not about uncontrollable passion, either. We started fighting, and we stopped making out at every opportunity, not too long into our time together. But we will never stop loving one another. I can’t imagine a life without him. I can’t wait until we are even older together than we already are. That’s gonna be great. 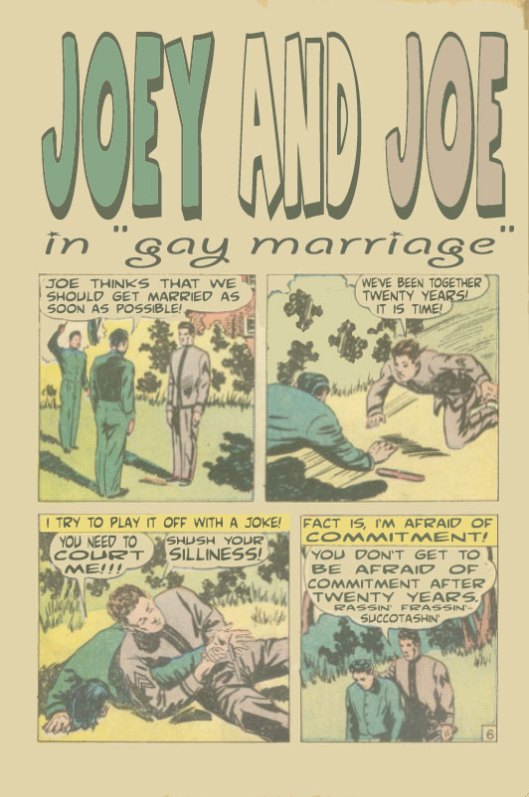 It’s a moot point at the moment, since we live in Kentucky, where we couldn’t even get married if both of us wanted to. Joe finds it insulting that I’m not thrilled with the idea of someday getting married. I don’t mean to be insulting. Marriage makes me nervous, though. I guess it’s just something I never thought I’d have to think about, a decision that I imagined I’d never have to face, a Rubicon that only others had to cross — like being pregnant. Boy, am I glad I’ll never have to be pregnant!

Um. Scientists? Please don’t be working on that last thing there. 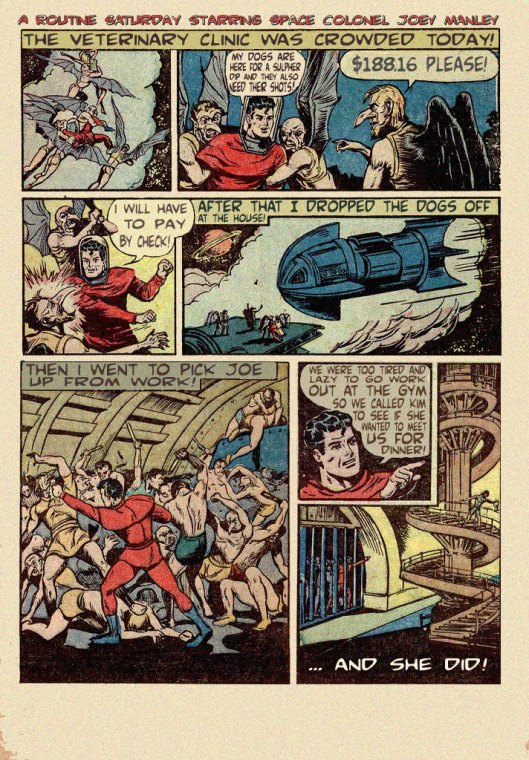 Artwork is from Rocketman # 1. I believe this artwork to be in the public domain. Even if it is not, I claim fair use, space cadets!

Plinky wants to know about my favorite summer memory.

The concept of “favorite” strikes me as weird in this context, Plinky. I have to say. Red velvet cake is my favorite kind of cake, because I like to eat it. In the mornings, I choose to wear my favorite shirt more often than I choose the others, because I like to wear it. My favorite pet is the one I am petting right now, Callista the kitty, because I like to pet it (and it doesn’t lick me or whine or demand my attention as much as the others). And so on. Memories (and colors, for that matter–but that’s a subject for another time) don’t work that way. I don’t sit around choosing memories to remember, and I certainly don’t choose to remember one of them over the others more frequently, just because I like remembering it. Plinky, Plinky, Plinky, what are you thinking? May I suggest that you mean to ask me, “What is something you remember happening in the summer that you think you could maybe write an interesting blog post about?”

Our first summer together, 1992, Joe and I drove down to Navarre Beach in Pensacola for either Labor Day or Memorial Day. I forget which; whichever one is a big gay holiday there.

Here’s what happened: I was bumped repeatedly by a fish in shallow waters. I’d run and scream trying to get away from it. Then look back down and it was still there, bumping me. I should mention that the beach was full of beefy gay men, body builders and circuit queens. I should also explain what I mean by “bumping.” I mean the fish would come right up to me, and bump its head on my legs, three, four, five times. Then I would run. It would chase. And then bump. I remain convinced to this day that it was a shark getting ready to bite. A four or five inch long shark. With a very hard head.

Here’s what happened before that: we drove all day and most of the night to get down there, from Birmingham, where we lived at the time. We arrived at 3am, and all the hotels were full up, so we decided to sleep on the beach. It felt safe: we were surrounded, as a matter of fact, by lesbians dancing to bongo drums. Also: that was the first, and only, time I ever actually saw the Milky Way spreading across the sky. Also: I woke up around noon, red as a crab from sleeping in the sun.

Here’s what happened after that: Joe hadn’t slept at all, so toward the end of the day we decided to try and go find a hotel room, but they were all still full up. He was driving the car and I was reading a Saul Bellow paperback. I don’t know why I remember that it was Saul Bellow and don’t remember which Saul Bellow, but that is what I remember. He fell asleep while driving, literally started snoring in traffic. I grabbed the wheel, steered us into the shoulder, and woke him up long enough to get him to safely pull us into the parking lot of a bank that happened to be nearby, under a tree, so we wouldn’t overheat. Then he slept, and I read the rest of my book.

Joe still tells people the story of me running like a silly queen from the fish that kept bumping me. He tells it to undercut my masculinity in mixed (gay and straight) company, because he doesn’t want any of our straight friends thinking he’s “the woman” of the relationship. Which man in a gay relationship is “the woman” is a question that one’s straight friends always have on their minds, even though they pretend they don’t — it does no good to explain to them that the question is meaningless, that, duh, obviously, there’s no woman in a relationship between two men.

So there you have it, Plinky, a memory for you.

Over the course of a two-month span in late 2009, my boyfriend (whose name is also Joe) lost his mother and one of his brothers — the one to mouth cancer, the other to, as they used to say, melancholia. A few days ago, we learned that Joe’s oldest sister has been diagnosed with what sounds like a serious form of cancer, as well as several other life-threatening diseases. She herself has been aware of her conditions for a while, but says that she kept quiet due to all the turmoil and anguish in the family already.

I guess the definition of middle age is when it starts to happen: people you know, people around you, people you’ve always taken for granted, peers and friends and family members, people your own age, even, start dying off on a regular basis. Or maybe the basis isn’t regular; it’s probably accelerating. An accelerating parade of illness and death from here on out. Joe and I are lucky. We are surrounded by people we love, people who mean the world to us, people we can’t imagine getting by without. Each of those people is going to die. We will lose every one of them. Every single one. If we don’t, you know, die first. No wonder old people are so hateful and impatient! Life must start to feel like a concentration camp or a Great War battlefield after a while, as the dead pile up on every side.