I do think large sodas are bad for society. I do. If people were proactively choosing larger sizes, maybe I’d think otherwise. But for some bizarre reason, larger sodas are being forced upon us. It’s not just that the largest available sizes have gotten larger; it’s that the smallest sizes have, too. When I order a small soda at the movie theater, what they give me is a 20oz cup — or what we used to call “a large soda” when I was a kid. Always makes me have to pee in the middle of the third act.

I also think mayor Bloomberg is overreaching in his call to ban large sodas in the city of New York.

I also think that I don’t give one tiny goddam about the inconveniences that New Yorkers have to face, because they themselves clearly don’t. Otherwise, they wouldn’t live there. As inconveniences go, having to buy three medium sodas in order to get your diabetes on is nothing compared to the other crap New Yorkers put up with every day. New York is the inconvenient hellhole where well-meaning multi-millionaires choose to live in order to punish themselves for their own success. They imagine it makes them human to suffer.

… aaaaand CafePress has deleted the design. Took about a minute and a half! Wow! Apparently parodying trademarks is a no-no in CafePress land. Boo! I don’t care terribly much (it’s their business, literally, if they want to keep me from selling perfectly legal stuff in their store, whatever, it is their store). But yeah. Boo!

Start spreading the news! New merchandise in the Mr. Manley store! You’ve got to be a part of it!

Most of you probably already know this, but some of you definitely don’t: Joe and I are moving back home to Louisville, Kentucky next week. This is not as cataclysmic as it sounds. I’m still employed by E-Line Media (although in a different — and, I hope, more personally and artistically rewarding capacity). I’ve spent plenty of words here bitching about New York City, but now that I’m leaving it, I feel oddly attached to the damn filthy shithole. I’ll be back one week out of every month. Maybe that will be enough New York to enjoy but not enough to disgust.

Speaking of which: there was a rat on the subway platform today.

I felt sorry for the little bugger. There was a woman on the other side shooing it in my direction. I think you can hear her a little bit. It decided it was more scared of me than her. I should have videotaped her reaction when it ran under her feet, but I was so startled I didn’t think to.

Anyway. Back to the subject at hand: our homeward boundedness. My hope is that, this time, we will actually live in our home in Louisville, rather than merely reside in our house there, which is what happened last time around. Joe says he doesn’t catch the difference. I think he will when it happens.

I knew, before moving here, that the financial services industry made its headquarters in New York City, in exactly the same way (I imagined) that so many other industries do. What I didn’t realize, what you can’t know until you’ve spent some time here, is that everything in New York revolves around the financial services industry. Which is to say, the money factory. All of the rest of it — the Broadway, the museums, the celebrities, the publishing, the broadcasting, the hustle and the honk and the flash — are secondary layers to the economy, there to service the titans of finance, the ones with the ready cash. New York is Wall Street. Everything else, everything you’ve ever heard about New York except for Wall Street, and I mean everything, is the exact equivalent of the titty bars and pawn shops that spring up around any town with an Army base: a side effect.

Let’s take a particularly counter-intuitive example: the art scene. Surely artists aren’t coming here for the money? News fucking flash. You can become a more successful artist in New York than you can in, say, Louisville, Kentucky, because there are lots of rich people here who like to impress their friends by buying art and pretending to understand it. There are lots of rich people here because the financial services industry — the business whose business is money — is here. That’s why, in the 50s, the Village became the Village (and why Williamsburg is currently in the process of becoming something other than Williamsburg).

I wish somebody had warned me how strange and quiet this book would be. Not that I have anything against the works that are strange and quiet. I like them quite a bit, especially (for example) Nabokov’s Speak, Memory. I also liked The New York Trilogy by Paul Auster just fine. I would have liked a heads-up, is all, on the strangeness and the quietness.

Maybe I should have known.

Maybe I just wasn’t paying attention to the metainfo, prior to picking up the book.

Maybe the prose style of the book has infected this review. That happens a lot with me, I’ve noticed. Maybe I should read the graphic novel version of ‘City of Glass,’ the first book in the trilogy. Maybe I will someday.

Hate to see an overflowing garbage can in a restroom. This one was fine.

Like I said, always a line, one person after another.

Sink was nice and clean.

The hardest part of this process is always the “taking of the door” picture — especially when people are around.

If They Saw My Face, Would I Still Take a Bow?

Summer of 1983. Russellville, Alabama. My high school buddy Jeff handed me a homemade cassette tape with the non-word “Nomi” scrawled across the label. I don’t know where he came across it. I do know why he gave it to me. He and I were the “New Wave” kids of our class. We were also the class fags, though neither of us had acknowledged this obvious fact out loud to the other at the time. We passed hints by sharing music, I guess, a sort of flirtation via one-upsmanship. I had introduced him to Yaz; he countered with Laurie Anderson. I followed up with Nina Hagen. Deeper and deeper into the so-called “New Wave” so-called counterculture we went, borrowing records from older, hipper friends, making tapes, swapping them out, starting over. The B-52s gave way to Pylon. Romeo Void. Lydia Lunch. X. Lene Lovich. This “Nomi” thing was his final gambit before we both moved to Tuscaloosa, to go to college, and surrendered to the janglier, guitar-ier, more straightforward and straight tastes of our new surroundings — REM, Camper Van Beethoven, “Take the Skinheads Bowling,” blah, blah, the whole earnest gamut of pre-grunge hard pop that people called “college rock” back then.

For that one summer before college, though, I became obsessed with Klaus Nomi, the strange, strange (it is a simple word; there is no other word), strange performer whose life’s work was contained on that homemade cassette. I didn’t know it at the time, but he was in the process of dying, already, of AIDS — one of the first kind-of well-known people to come down with the disease, which most people still called “the gay cancer.”

I hadn’t thought much about Klaus Nomi since then. Every now and then one of his songs would get stuck in my head. The other day at work, I caught myself singing — aloud — his version of “The Twist,” while my co-worker Brian (who is not, shall we say, the New Wave kid of the office) looked at me like I’d lost my mind. I tried to explain Nomi to him, which led me to YouTubing some of Nomi’s performances, which, in turn, led to my finding out that this documentary exists. Popped over to Netflix, and sure enough, they had it, but only in DVD form.

Here is what I learned from the film:

If you have an interest in the New York underground arts/performance scene as it existed in the “New Wave” period (that is, after the glory days of CBGBs, but before the rise of Soho) this documentary has lots of nice little historical bits for you. If you are a Klaus Nomi fan, of course, you’ve definitely got to see the thing. Otherwise, I’m not sure it has any value to anybody else. I loved it — but for purely subjective reasons.

The door automatically unlocks after 15 minutes.

If this were San Francisco, some hungry junkie would have eaten these plants already.

Looks less comfortable than it is. Automatic plastic wrap dispenser around the lip.

This kind of urinal is prettier than urinals have a right to be.

Don’t forget to look up! 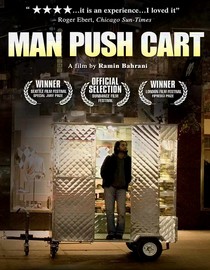 Man Push Cart is as bleak a portrait of life in New York City as they come. It’s about a former Pakistani rock star who moves to New York, only to lose everything, everything, everything. By the time we meet him he’s already lost his singing career, his wife (who has died), and his child (whom his wife’s parents won’t let him see). All he has left is the coffee-and-bagel vending cart he uses to make a meager living with, a couple of friends he’s made at random, whom he doesn’t really know all that well, and a fucking kitten.

Yes, even the fucking kitten dies.

There is your spoiler.

I liked this movie; it was well-done. But it was also the most depressing thing I’ve seen in a long time, the kind of story that will make a middle-aged man who has recently moved to New York in the midst of some personal difficulties, in particular, start up screaming at night. It encapsulates everything scary about New York — truly scary, not fake 1970s mugger-on-every-corner scary. How calmly people watch the destruction of other people’s lives, here. How calmly people watch the destruction of their own lives, here. Welcome to the jungle baby.

Plants growing in the tracks is a very Western theme, so maybe it’s that …

… or just the general fecundity.